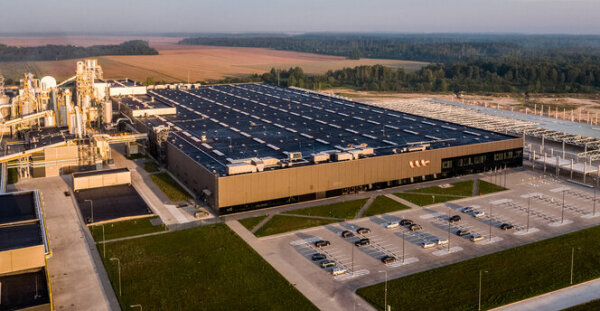 The largest greenfield investment in the history of Lithuania: the “Vakarų medienos grupė“ factory in Akmenė has been opened

In September 4th, a record breaking greenfield investment in Lithuania has been presented in Akmenė - “Vakarų medienos grupė“ officially opened one of the largest particle board factories in Europe, with the investment reaching a total of 146 MEUR.

The majority of the 140 new job positions are intended for automated bench operators. An investment of approximately 1 MEUR is dedicated to every single high added value job position.

According to Sigitas Paulauskas, the principal shareholder of VMG Group, the establishment of the factory suggests an ensured demand for particle boards in Lithuania as well as an increase of possibilities in building, wood for construction and other business sectors.

“The value created by the project greatly affects the manufacturing industry as well as the economy of the country and are therefore the primary reasons for choosing such direction of investment. The innovations installed in the factory, the sustainable environmental solutions as well as the high added value job positions allows us to present an extraordinary body of industry, that creates value for the region and incites Lithuania‘s leadership in Europe,“ claims Sigitas Paulauskas.

Prime Minister Saulius Skvernelis, who participated in the opening of the factory, said that this VMG Group project is significant not only for the region, but for the whole country as well. “Lithuanian investors are well capable of creating high added value job positions and products,“ he claimed.

The mayor of Akmenė area Vitalijus Mitrofanovas pointed out that the record-breaking investments of the VMG Group are already providing a great improvement to the economic and social aspects of the area. According to him, many of the employees of the factory are locals, meaning other local businesses are being set up alongside it, which also brings about a recovery of the real estate market.

According to Sigitas Paulauskas, uniqueness of the factory on a European scale is created by the production capacity and unique product specifications.

The factory will be able to offer the market an exceptional particle board as thin as 3 millimeters. The unique technologies for the Akmenė factory were developed and installed by the German innovation company “Siempelkamp”. Annual production capacity of the factory will reach up to 600.000 m3 of particle board. Future plans consist of further development of production capability.

The construction of the new VMG Group factory began in August 2018. During the implementation of the project, the infrastructure and its connections with the main communication arteries of the country were also developed in the territory of the Akmenė Free Economic Zone – a railway branch was constructed as well as networks of regional roads were developed. According to the company, this will result in an effective use of the region‘s geographical advantages.

Currently, a second factory is rising next to the first VMG Group Akmenė project - a cabinet furniture factory. The 60 MEUR investment-reaching project is scheduled to become operational next year.

VMG Group is one of the largest wood processing and furniture production groups in the Baltic States, uniting 16 Lithuanian and foreign companies with more than 4000 employees. Over 90% of VMG Group's products are exported to foreign countries. During the year 2019 the group 's unconsolidated sales increased by 13% and reached 394 MEUR.

The “Investors' Forum“ association recognized the VMG Group as the investor of the year 2019, evaluating the company‘s "sustainable and value-added investments for the country's economy".

We use cookies in order to optimize the operation of this site and constantly keep it up to date with your needs. More information on what cookies we use and why, as well as on the ability to change (activate) their settings can be found on the website of the VMG group companies Privacy Policy and Cookies Management